EnginesWork.com is reader-supported. When you buy through our links, we may earn an affiliate commission at no added cost to you. Read more

N54 is the first BMW engine with turbocharging and direct injection of the fuel under high pressure, which is different from its predecessor’s outstanding combination of performance and fuel economy.

What Cars Have A BMW N54 Engine? 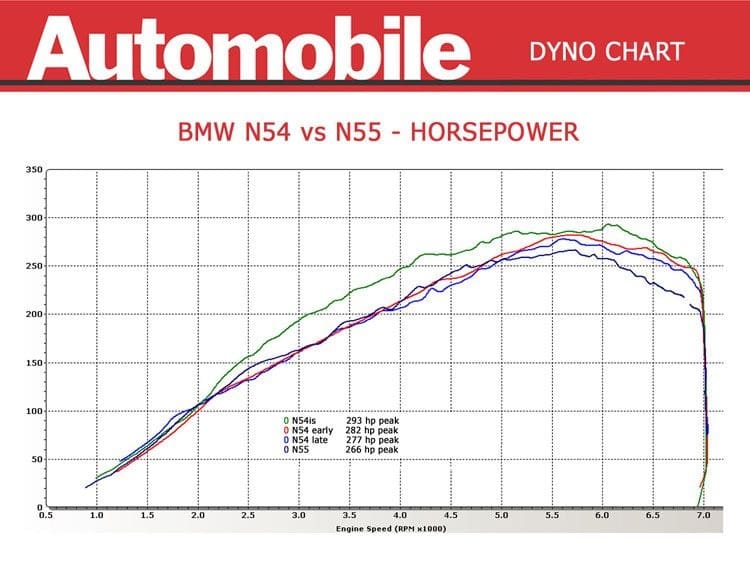 Graph of comparing the fresh engine from BMW N55 with one twinscroll turbine and old one N54 with twin turbo.

As can be seen from the graph, any version of the 54 is ahead in terms of power (from wheels) over the new 55, which by the way is installed on a new 3-series BMW F30! WTF???? Leave your comments about this…

In our opinion, the most effective way of forcing the BMW N54 engine is chip tuning with the completion of some elements of the car. With a stock automatic transmission, it can be considered a maximum power of 400-420 hp.

Refresh your car with new cabin air filter. Read and understand why it’s so important to change it periodically.

This program is only possible for engine with  81 MSD control unit (for cars up to 03/08 requires retrofitting on this unit, the cost of MSD 81 -is about 1500$). This ensures reliable and balanced work in all modes, and includes the following:

A big single turbo kit along with cylinder block head porting will provide our engine with maximum power. You will benefit from wide range of different components. You can use the Alpine B3 S Biturbo head gasket in order to reduce the compression ratio. The N54 engines stock internals are able to handle with 650-700 HP.

It’s a German engine with a lot of technical features packed into it, so you’ll have to be prepared to spend lots of money on repairs and have emergency cash if the engine encounters unforeseen faults, as it is a contemporary German automobile.

Forced motor is already close to the limit of the capacity of all engine systems and any failure could cause a transition emergency operation. Therefore, when driving at a maximum power level for quite a long time, it is important to monitor the engine temperature, oil temperature, and pressure. All of this can lower the engine’s lifespan.

In general, we can say this engine is reliable. Also, we can recommend it to those of you who want to tune it. Don’t forget to replace spark plugs every 12,000 miles (20,000 km) and motor oil and everything will be OK.

GC Lite turbos are quite simply, THE ideal turbo upgrade for N54-powered vehicles, whether it be a direct OEM replacement for a blown unit, or a full race build looking for world-class output.

Was this article helpful?
YesNo

Dan is a co-founder of Engineswork. He knows everything about internal combustion engines. Ask your questions in comments down below this article - he will be glad to help you anytime.
Scroll to Top