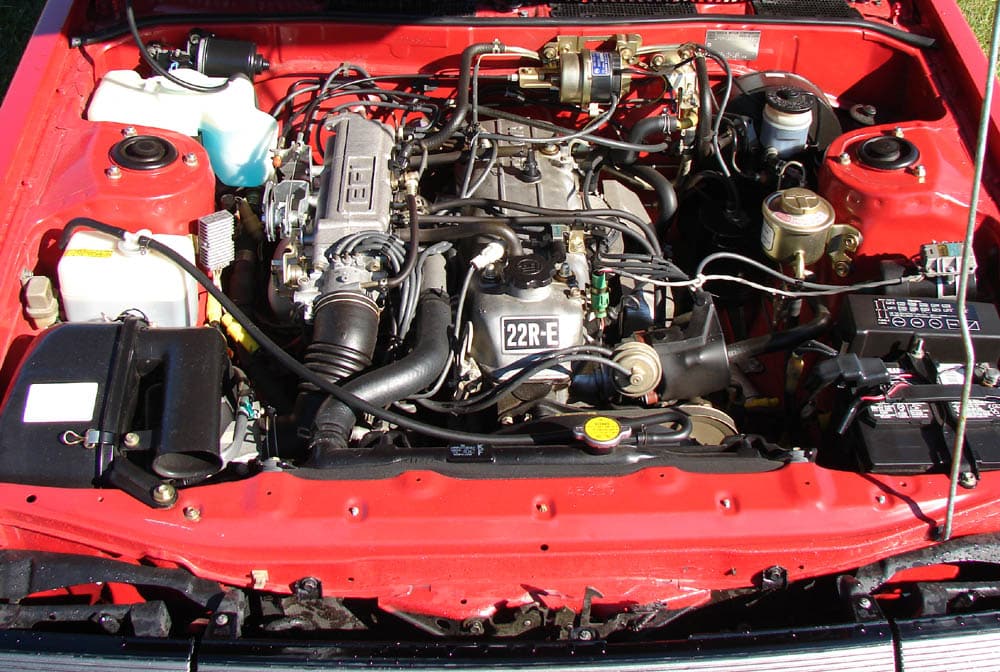 Having troubles with the timing chain, the motor passed through some updates. Consequently, many 22RE components aren’t compatible with 22R and 22RE motors, released before 1985. Apart from 22RE’s fuel injection, post-1984 22R and 22RE had some other distinctions.

Being one of the latest Toyota R series motors, 22R with 2.4L displacement and 4 cylinders is noted for its durability. Mainly, this motor was utilized for automobiles, sold outside US and Canada. Among the vehicles for the North American market, featuring 22R, were 1984-1995 Toyota pickup trucks plus 1985-1995 Toyota 4Runner.  Additionally, the motor was employed for Toyota Hilux, Celica plus Corona along with Volkswagen Taro (a re-badged variation of Toyota Hilux).

When 22RE was first released, it as well as a newer version of 22R was provided with a single-row timing chain instead of the dual-row one. In 1985, these motors were subjected to other upgrades and almost all major components were either replaced or modified. After that restyling, the motors were manufactured for some time before their production was ceased. Actually, the motor was utilized in Toyota Hilux, pickup plus 4Runner till 1995 whereas Volkswagen Taro employed it till 1997.

Moreover, 22R is still famed for its astonishing reliability. Though it can hardly be called a high performance motor, many drivers and car enthusiasts assure that it’s the most excellent engine ever created by Toyota.

Having a displacement of 2.366 liters (144.4 cu in), 22RE didn’t demonstrate astonishing power to weight correlation. Nevertheless, the motor was highly estimated for its endurance and reliability. It featured a cylinder bore of 3.62 inches and a stroke of 3.5 inches.

Original 22R-E kept a cast iron block. Moreover, soft piston rings made a major contribution to the motor’s long lifespan. They allowed cylinder bores to escape from ridges as long as motor functioned. Valvetrain featured a traditional push rod system with the camshaft in the block. It had 1 intake and 1 exhaust valve per each of four cylinders (8 in total).

22R-E gives people exactly what they want from their engine, high durability. No one wants to spend hours in a garage or car repair shop, trying to deal with all the troubles emerging in the engine. People just want their automobile to drive them smoothly and faultlessly from one point to the other.

Though the production was ceased in 1997, many 22RE motors are still in good condition and are still utilized for automobiles. Usually, this motor can run for 300,000-400,000 miles with no troubles.

However, in some cases, it may even reach 1 million miles. While the output isn’t so high and is usually of 114 hp, these Toyota motors have a great number of fans around the world thanks to their fantastic lifespan.

22R frequently faces troubles with timing chain on the motors, released after 1983. They are plastic and that’s why they break pretty often. It leads to the timing chain’s sawing into a water jacket and ruining the motor. The solution is to substitute them with steel guides.

The other common problem concerns head gasket as the motor features iron block and aluminum head. And, aluminum expands much more. So, they may cause some problems due to overheating. But here is good news: 22R has no other serious faults.

2AR-FE Engine Specs and Problems Reviewed: All Info You Need to Know

SR20DET Engine History, Specs and Info You Need to Know

8.1 Vortec Engine: Review, Info and All Specs You Need to Know

LS2 Engine Review: Info and Everything You Need to Know