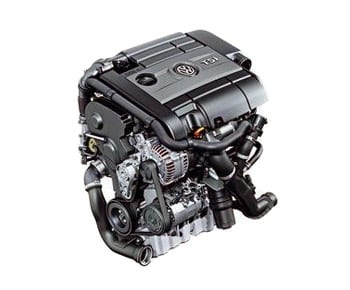 The EA113 engine series began to be established on cars of VAG concern in 2004 year. This series has been developed by engineers who have taken as the basis the 2.0 FSI engine with direct injection of the fuel.

The most important difference is the presence of the turbo. Also on the turbocharged engine cylinder block is made of cast iron rather than aluminum alloy, as at atmospheric.

Also in the construction of the internal combustion of TFSI engine apply:

The EA113 2.0 TFSI engine series in its design has hydraulic lifters, a phase shifter on the intake shaft and system of direct injection of the fuel. Also the toothed belt is used, which need to be replaced for every 80-100 thousand km.. Otherwise, thr toothed belt breakage results inevitably in a valve bent.

The 2.0 TFSI EA113 series depending on the power used two types of turbines:

The 2.0 TFSI had a single water-cooled turbocharger that was integrated with the exhaust manifold into a single unit. For the AXX, BWA, BPY and CAWB engines which produced peak power of 147 kW, a BorgWarner K03 turbocharger provided peak boost pressure of 0.9 bar (13.05 psi). It is understood that the BorgWarner part number for the turbocharger is 5303-970-0105 (OEM part number 06F 145 701D/E/G).

To prevent this from happening, the air recirculation valve was opened by an electric servo motor, creating a bypass channel for compressed air to flow from the compressor wheel back to the suction side of the compressor circuit, thereby keeping the turbine at a constant speed. When the throttle valve was opened, the turbocharger air recirculation valve would close and charge pressure was restored.

In addition, the ignition coil does not live too long. Also, the intake manifold can be periodically polluted. To solve this problem you nedd to cleane it.

The rest of the engine is good, cheerful, likes high-quality gasoline and oil.

Over time the motor has been replaced by another 2.0-liter turbo engine EA888 series.

If such a power is small for you, then it is necessary to install the intercooler, outlet on 3 ” pipe, cold intake, a more powerful pump and Stage 2, it will raise the power up to 280-290 hp.

A further increase in capacity can be extended with a new more powerful K04 turbine and injectors from Audi S3, such a configuration gives ~ 350 hp.

Use engine oils displaying the ILSAC certification mark (“starbust” symbol) on the container. If these oils are not available, an API classification SN or higher can be used. Sixth Gen 2000 2001...