The clutch is engaged and disengaged through hydraulic or electronic controls, allowing for smoother operation and eliminating the need for manual clutch operation. Despite this automation, the clutch still plays an important role in the smooth operation of an automatic transmission. Without it, the car would be unable to shift gears or come to a stop without stalling the engine.

The symptoms of a breakdown of the automatic transmission are typical and unambiguous:

Symptoms Of A Bad Clutch In An Automatic Transmission 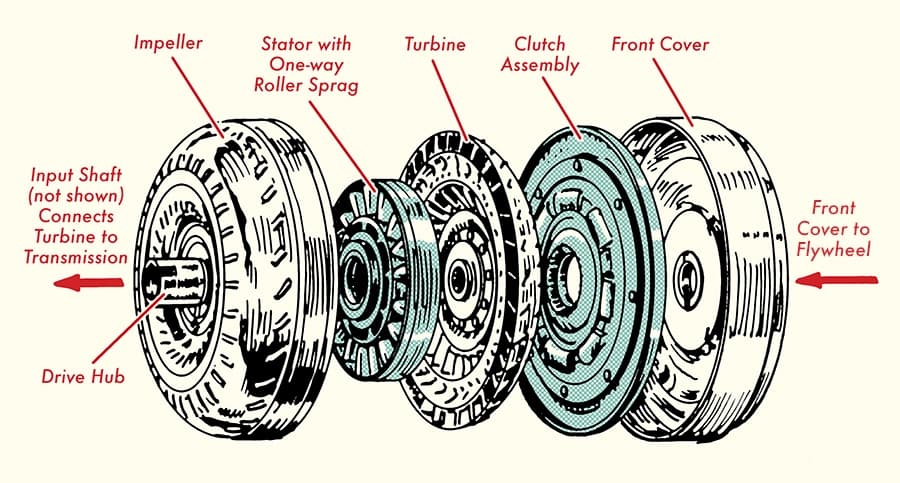 One telltale sign of a bad clutch in an automatic transmission is a delay or hesitation when shifting gears. This can be particularly noticeable during acceleration, as the engine may rev while the vehicle remains at a standstill. In addition, the clutch may make strange noises while shifting or may slip out of gear unexpectedly. It’s important to address these symptoms immediately, as a damaged or malfunctioning clutch can lead to further damage to the transmission, and the cost of repair will only increase with time.

Another symptom is perceptible vibration on the body during or at the beginning of the movement. This may be caused by the misalignment of the clutch or other transmission components.

Transmission fluid is a crucial ingredient for an automatic transmission’s performance. It not only becomes the torque converter’s foundation but also transmits pressure, controls temperature, lubricates friction between parts, and engages the gear.

The transmission fluid has its own resource. Since it is exposed to high temperatures, constantly in motion, and washes over parts, chemical and physical properties are lost over time. The oil becomes contaminated, becomes rare, and lubricating properties are lost. If debris gets into the oil (usually wear products produced by rubbing parts), it settles on all the components that the oil washes. The result is clogged parts and their failure.

You should always monitor your oil’s color, consistency, and level of contamination. You can do this during regular maintenance or by using the probe provided with your vehicle. 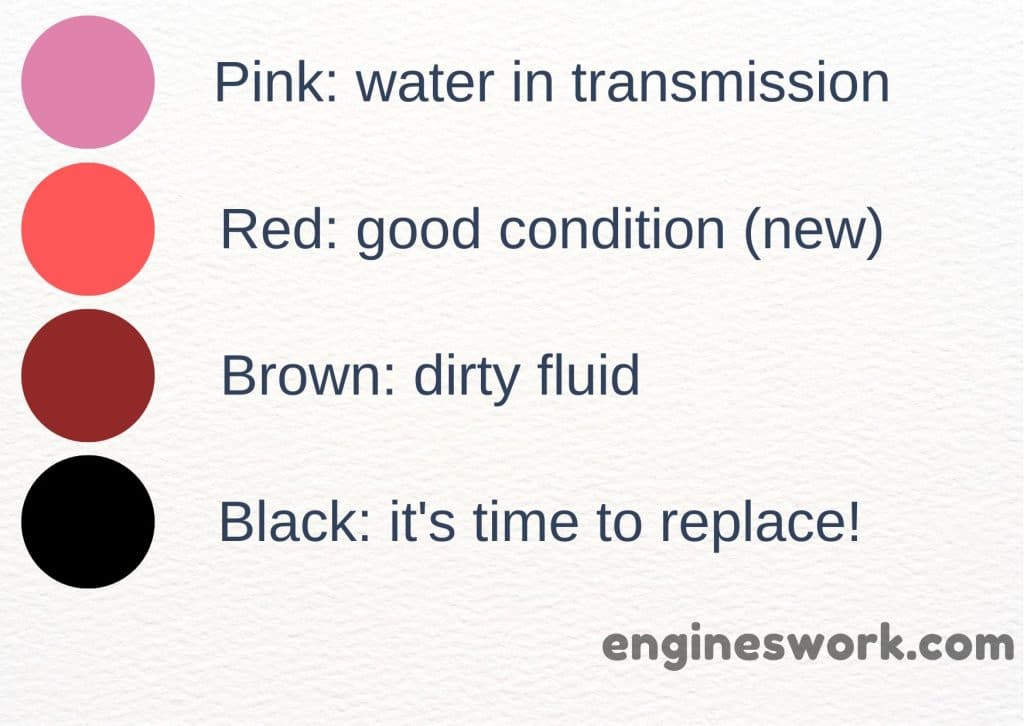 Consequently, if the oil is not perfect, it will eventually fail. Oftentimes, a timely automatic transmission fluid change can become an effective preventative measure that saves you from a lot of bigger problems down the road. If despite taking these precautions, a problem in the transmission occurs anyways due to issues with the oil, several potential causes are listed below.

How To Know If You Need A New Clutch

When it comes to your car’s clutch, it is important to pay attention to changes in performance. If you notice the clutch slipping or an increase in the distance needed for the clutch to fully engage, it could be time for a replacement. Additionally, strange noises coming from the clutch, difficulty shifting gears, and an overall decrease in responsiveness are all signs that your clutch may need to be replaced.

Also, each clutch has its own replacement frequency. If, according to the owner’s manual, the replacement time is already approaching, you still need to change it, even if there are no bad symptoms.

Cost of Replacing A Clutch In An Automatic Transmission

The average clutch will last most drivers around five years or 100,000 miles before requiring replacement – though this number may be lower for those who often drive in stop-and-go traffic or haul heavy loads.

Replacing a clutch in a vehicle with an automatic transmission can be a costly repair. The labor required for the replacement can range from several hours to a full day, depending on the make and model of the car. In addition, special tools may need to be used in order to access and remove the transmission.

The cost of the actual clutch also needs to be considered. Depending on the vehicle, it may require an aftermarket or even specialty clutch, which can increase the cost even further. It is important to consider these factors when determining the cost of replacing a clutch in an automatic transmission.

Although the cost of replacing a clutch mostly relies on various factors, such as what type of car you have and its transmission, you can expect to pay an average price of $800 dollars just for labor services.

How To Prevent Damage To Your Clutch

Prevention is key when it comes to the longevity and performance of a car’s clutch. One of the easiest ways to prolong the life of your clutch is by adjusting your driving habits. This means avoiding excessive idling, abrupt acceleration and deceleration, and riding the clutch while driving.

Regular maintenance also plays an important role in preventing damage to the clutch. Ensuring that the clutch fluid levels are adequate and scheduling regular inspections can help to identify potential issues before they become major problems. Just look at the owner’s manual to find out the service intervals.

In addition, regularly checking and replacing worn-out components, such as the clutch pedal and pressure plate, can help to prevent damage to the entire system.

By following these simple steps, you can ensure that your clutch remains in optimal condition for years to come.

How To Diagnose a Bad Clutch?

If you think you may have a bad clutch, the best way to diagnose the problem is to consult with a certified mechanic. They will be able to properly assess the situation and determine if a replacement is necessary. If you come to the diagnostics already with a breakdown, it will be carried out as follows:

Mechanical and visual inspection of the automatic transmission. The specialist can inspect all details by conducting these works without disassembling the box. This includes checking the oil and electrical wiring and removing the pan. If any damage is found on the outside of the box (such as deformation or cracks), then it will be repaired by the master. The next step is only conducted if visual inspection does not produce results.

ECU diagnostics. The OBD scanner reads the error codes that the onboard computer has memorized and deciphers them to give an understanding of what might be wrong. Further actions, like troubleshooting, are decided based on this information–the problem could be in the control unit or other parts.

In conclusion, when it comes to your car’s clutch, it is important to be aware of the warning signs that indicate a replacement may be necessary. If you notice any of the following symptoms, consult with a certified mechanic as soon as possible: difficulty shifting gears, strange noises coming from the clutch, and an increase in the distance needed for the clutch to fully engage.

Ignoring these issues can lead to further damage in your transmission and increased repair costs. Maintaining regular maintenance on your car’s clutch system is also important to prevent extensive damage down the road. By being proactive and following these simple steps, you can ensure smooth driving for years to come.

Can The Clutch In An Automatic Gearbox Fail?

Like any other car component, the clutch in an automatic gearbox can fail. However, this is relatively rare. The most common cause of clutch failure in an automatic transmission is contaminated or low fluid levels. This can lead to slippage and, eventually complete failure. Other causes of clutch failure include worn-out clutch discs, pressure plates, or release bearings.

There are several symptoms that may indicate a failing clutch in an automatic transmission. These include:
-Difficulty shifting gears
-Strange noises coming from the clutch
-The engine can rev, but the car doesn't accelerate quickly.

How To Tell If Clutch or Transmission Is Bad

If the transmission fails, the car will not be able to drive, while it still retains this ability if the clutch fails. In some cases, the clutch may simply need to be adjusted. However, if there is extensive damage, it may need to be replaced.

Signs Of a Bad CVT Transmission

The most common symptoms of a bad CVT transmission include:
-Shuddering or shaking during acceleration
-Delayed engagement when shifting from park to drive
-Erratic shifting
-Loud noises when accelerating
-Check engine light is on
-Poor CVT Response