Overfilling your car’s oil can cause a number of problems. Overfilled engine oil threatens an early failure of all rubber elements: seals, gaskets, and oil seals due to increased pressure on them. The engine’s overall performance worsens due to oil foaming and getting it on various elements, including hydraulic lifters. You can also experience the following:

How Much Oil Is Too Much? 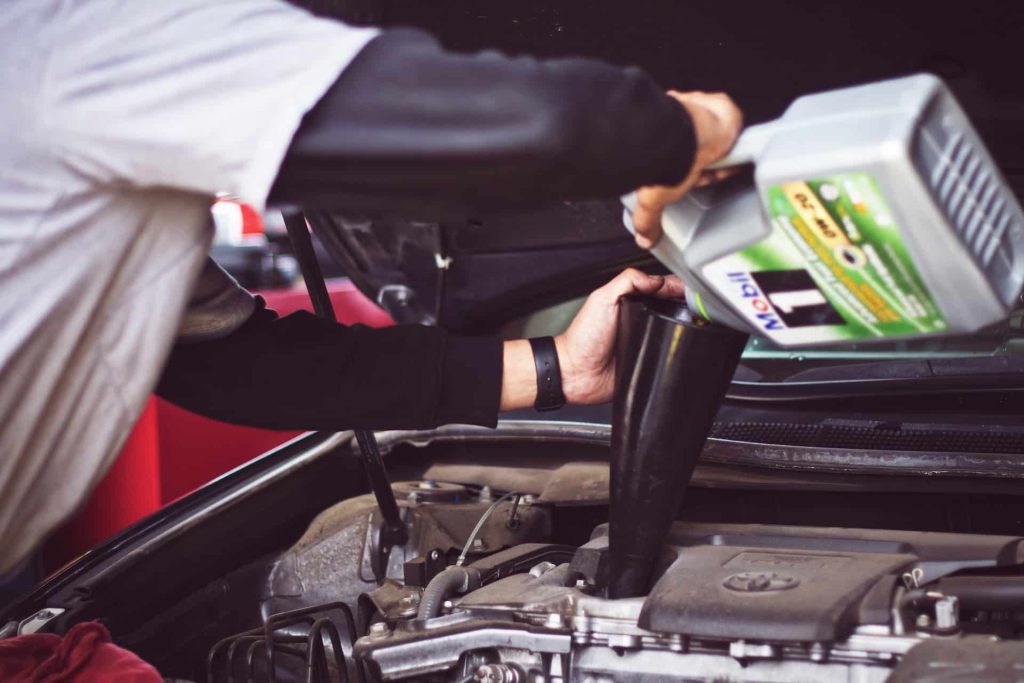 The short answer is that too much oil is when the oil level is greater than or equal to the dipstick’s marked maximum. The level when you are in the middle between minimum and maximum is considered ideal.

In order to get the right answer to this question, you need to know exactly how much oil you need to pour into your engine. This information is stored in the owner’s manual. You can also use our site to find this data. Knowing this information will not allow you to go beyond the correct limits when changing the oil.

But it may turn out that you will not be able to drain all the oil before you fill in a new one. In this case, such a situation may occur when you fill in the right amount of engine oil but still, exceed the maximum mark.

After letting your car’s engine cool for 15-20 minutes on a level surface, you can check and see if you overfilled it with oil by checking the dipstick. It is important to wait 15-20 minutes for the motor to cool down so that all the grease can drain into the sump and give an accurate indicator reading.

One sure sign of an oil spill is an increase in fuel consumption for no other apparent reason. Filling with oil above the norm leads to excess lubrication providing additional resistance to pistons and piston rings moving in the cylinders. The consequence is that the crankshaft becomes more difficult to turn, and less torque is transmitted to the wheels.

The car accelerates worse, and reactions to pressing the gas pedal become less clear, especially on the “bottom.” To compensate for losses and obtain the usual accelerating dynamics, the driver presses harder on the accelerator, resulting in increased fuel consumption.

Overflowing oil affects more than just fuel consumption. Any liquid with heating tends to increase in volume since engine oil operates at high temperatures and overflow results in increased pressure on rubber seals and other sealing elements.

Gradually, the efficiency of the seals decreases, and the oil begins to flow. Such consequences of oil overflow into the engine cause increased lubricant consumption and contamination of the engine compartment and may lead to the need to replace oil seals.

How To Avoid Overfilling Your Car’s Oil?

Everything is simpler than it initially seems – each internal combustion engine has an oil dipstick with two marks: a minimum and a maximum. To get an accurate reading, park the car on a flat surface, wait 15 minutes, and then check the oil level.

Your engine has gone through oil starvation if the level is below the “minimum” mark. Failing to fill the lubricant sufficiently puts a strain on the oil pump – an expensive assembly to purchase and replace – and all other engine elements.

However, it is very unlikely that you will find yourself in this situation because the red oiler icon on the dashboard will immediately let you know if there is a lack of engine oil. In other words, it would be quite difficult to do this.

More often, there is a problem with overfill. There is no indicator of excess oil in the car, and the owner of the serviced car begins to quickly and efficiently destroy the engine.

The most common reason for pouring excess oil into the engine is an incorrectly carried out process for replacing it. During an oil change, it is important to drain all used compositions from the system. Most often, drivers do not wait until all the oil has drained from the system. Before draining the oil from the engine, you need to let the car stand for some time so that its glass from the working surfaces.

You should get into the habit of checking your oil level often, especially after an oil change. Your car’s owner’s manual will have specific instructions on how to check the dipstick.

How to Remove Excess Oil from Your Engine

The first thing to remember when is that such a car cannot be operated. Otherwise, it will lead to various problems, especially with old engines with high mileage. There are several ways to partially drain oil from the engine:

Use a drain plug. The process does not differ from the usual draining of oil when replacing it, but it is necessary to drain the entire composition and part of it. First, place the car on a pit or overpass. Next, unscrew the drain plug and drain a little excess oil. Screw back in  the drain plug and make sure with a dipstick that now the amount of oil meets standards;

Oil pumping through the oil filler neck. Automotive stores sell syringes made specifically for this purpose, but you can also use a regular medical or culinary syringe. Alternatively, you can use a rubber tube or dropper. Be careful not to let any dirt or debris enter the engine through the oil filler’s neck.

Will 1 Quart of Extra Oil Hurt My Engine?

It largely depends on the size of your engine. A quart of oil in a big V8 is not going to be as critical as that same amount in a small four-cylinder. But in any case, I would not advise you to fill in more than necessary, even if it is only one quart.

How Much Oil Does a Car Need?

The amount of oil your car needs depends on a number of factors, including the make and model of your car and the type of oil you are using. However, most cars require between 4 and 7 quarts of oil.

If you are unsure about how much oil your car needs, it is best to consult your owner’s manual or ask a professional mechanic. Overfilling your car’s oil can cause serious damage to the engine, so it is important to be sure that you are using the correct amount.

Can You Drive a Car With Too Much Oil?

If you have overfilled your car, taking care of the problem is important as soon as possible. Excess oil in the engine can cause a number of problems. So, the answer is that you are actually able to drive a car, but it is not recommended.

Can Too Much Oil Cause Engine Noise?

If you have too much oil in your engine, it can cause a number of problems. Engine noise could be one of them. Excess oil can cause the engine to run louder than normal as it has to work harder to pump the oil around.

If the oil level on your dipstick is too high, it could be a sign that you have overfilled your engine. If this is the case, you should take care of the problem as soon as possible. Excess oil in the engine can cause a number of problems, so it is best to avoid it if possible.