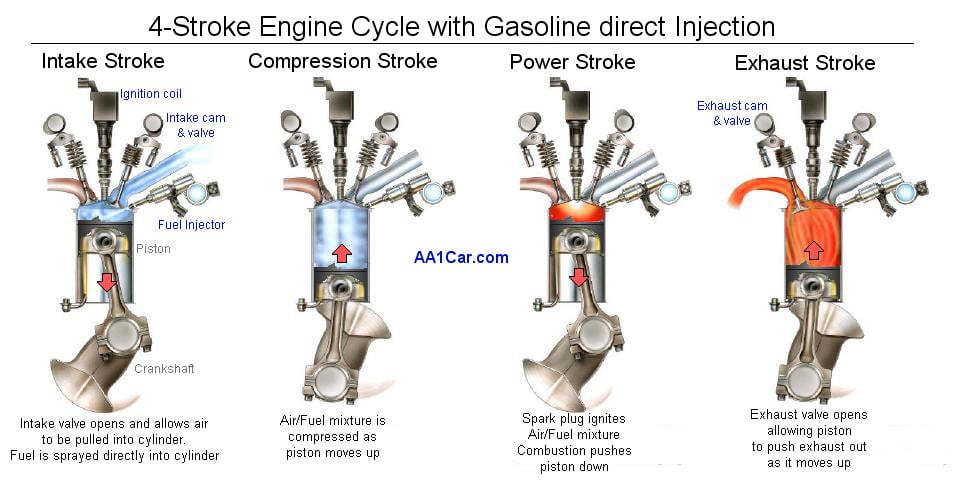 Fuel delivery is the most complicated aspect of the modern car system. In the beginning, fuel is delivered to the engine through the carburetor. This carburetor has a difficult time providing the right quantity of fuel/air mixture to the engine. Things changed quickly and better when the fuel injection system was introduced.

Today’s modern car now uses the fuel injectors to deliver the right quantity of air/fuel mixture. The function of the fuel injector is to provide the right amount of fuel in the right moment and a suitable condition. The injector produces fewer emissions which significantly increase fuel mileage.

How The Engine Fuel Delivery Works

The purpose of the car fuel system is to store and supply fuel to the engine. This is done through a series of operations and processes. Firstly, The fuel stored in the tank is drawn by the fuel pump. The fuel travels to different parts and later to the fuel injector where the fuel is then mixed with air to generate explosions and bring the engine to life. It is essential that fuel delivered to the combustion chamber must be the right quantity.

There are a lot of factors that can influence fuel delivery such as the fuel supply must be about the same amount of air. This has generated a lot of issues before the introduction of the fuel injectors. The old system (single carburetors) used in old vehicles had to supply specific numbers of cylinders with fuel.

This means that the cylinder closer to the carburetor has a better advantage over the other cylinders while the farthest cylinder receives minor fuel supply. This has a massive disadvantage in fuel mileage. With this kind of problem, a more efficient method for fuel delivery has to be designed, and that’s how the fuel injection system was designed.

What is a fuel injector?

The fuel injector is an integral part of the car that assists in delivering fuel to the engine’s combustion system either directly or indirectly.

The fuel injector is an electronically controlled valve that includes some sensing mechanism that determines and controls the amount of fuel that needs to enter the cylinder for combustion. The injector is capable of opening and closing to deliver the right amount of fuel.

To deliver the right amount of fuel, the engine control system is equipped with a lot of sensors. There are two types of fuel injection systems that are commonly used in today’s modern cars.

Most modern cars come with an indirect injection system. A particular pump sends pressurized fuel from the tank to the engine bay where it been distributed individually to each cylinder. Depending on the engine system, the fuel is injected either into the inlet port or inlet manifold. The air mixes with the fuel passing through the inlet port/manifold then enter the chamber. Some cars are designed with more than two injectors where its injector feeds each cylinder.

The electronic injection system is an automated system controlled by the microprocessor control unit also known as an electronic control unit (ECU), which is a mini-computer. The sensors installed on the engine supplies this mini-computer with all the information required such as temperature in the air intake, air pressure, engine speed, and accelerator position.

All the information supplied to assist the system in providing the exact amount of fuel needed. The sensor signal the off/on the valve to open and close the inlet port. All this process happens in a matter of seconds. The electronic system operates at a lower pressure compared to the mechanical system.

The mechanical fuel injection system works in a straightforward pattern. Fuel is supplied from the tank at high pressure to a fuel accumulator. From there, the fuel goes through the fuel distributor which provides each injector from where it is fired into the inlet port.

The flap valve controls the airflow as a result of the response from the accelerator pedal. As the airflow increases, the distribution of fuel increases to the injectors to keep the air/fuel mixture correctly balanced. Many automotive manufacturers used mechanical fuel injection on sports cars and sports saloon. All this process happens in a matter of seconds.

Maintaining your fuel injection system is one of the critical ways of achieving better fuel performance and a longer life for your engine. If the car owner neglect servicing and maintaining the engine such as changing the oil and replacing the filter, there are chances that the injectors will suffer it.

There are several methods of cleaning and maintaining your fuel injection system. Cleaners can be used to remove contaminants from the system by pouring additives directly into the fuel tank. The additives flow through the system where it eventually reaches the injectors to remove impurities.

Basically, the function of an injector is to supply atomized fuel so that it burns wholly and uniformly. You might believe that the process is simple, but it is sophisticated to make all the process work seamlessly. Your injectors supply fuel directly or indirectly to the engine where it can be combusted. There are a lot of steps in getting the fuel to that point, and that has brought fuel injection technology.

One thought on “How Does a Fuel Injection Engine Works?”