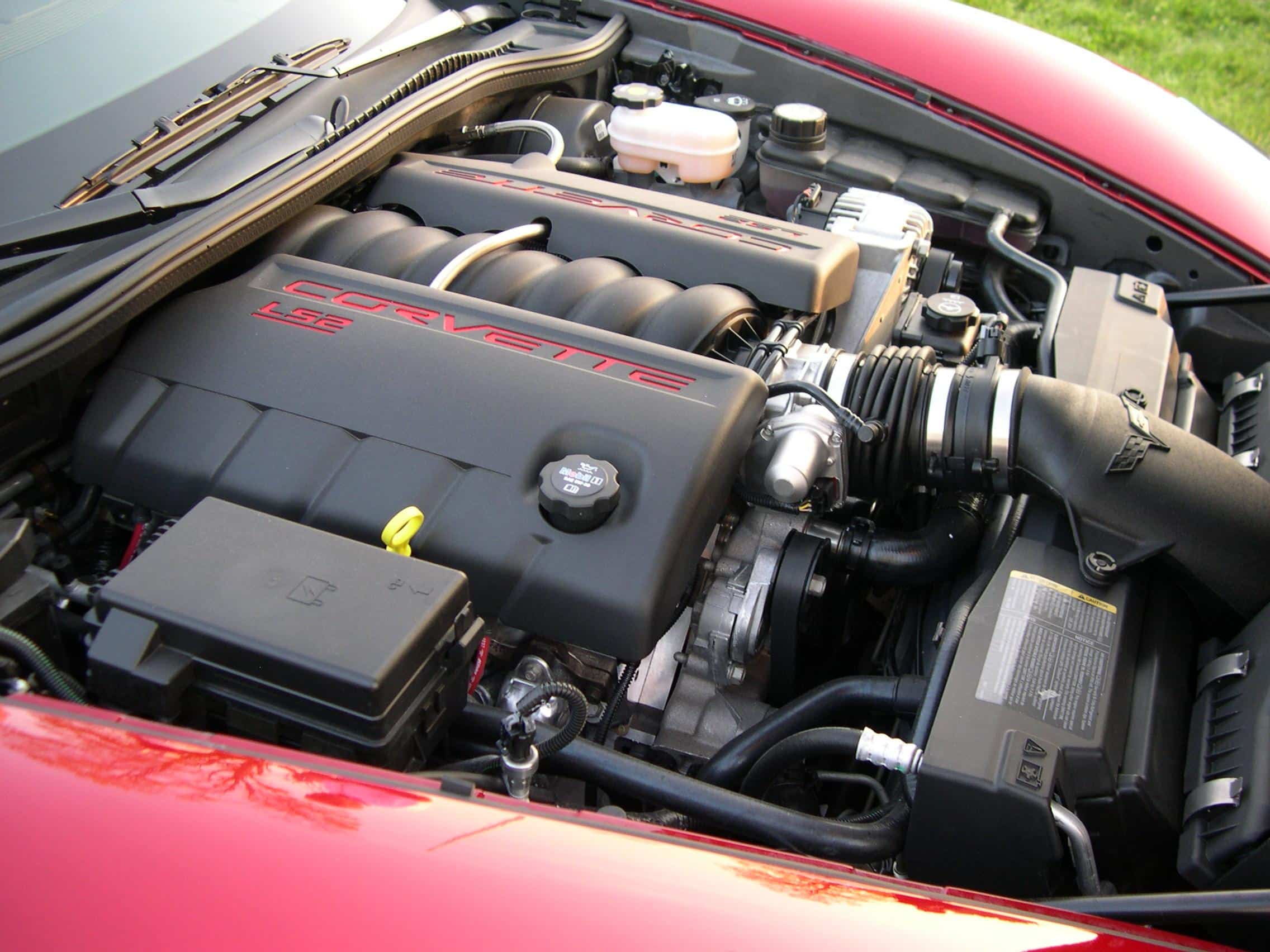 Gen III small-block motor was a real breakthrough in the automotive world at the time of its presentation in 1997 and employment for Corvette’s fifth generation. It was the first restyling and modernization of the original small-block engine, presented by Chevrolet in 1955.

The old and fresh versions had no similarities, except for 4.4 in bore centers. Of course, many car enthusiasts felt excited and, simultaneously, worried about this modification as everyone had already got used to the old Chevy motor, noted for its great productivity, reliability and reasonable cost.

However, pretty soon, everyone fell in love with fresh LS1 as keeping the same small block, it could boast of great power and durability. Just one look at that engine assured that it would definitely give you some extra hp.

In 2005, LS1 was replaced by 6.0L LS2, applied for the new Corvette, Pontiac GTO, and Chevrolet SSR. It reached 400 hp with a torque of 400 lb/ft at 6,500 rpm. Its compression index was 10.9. Naming LS2 as Gen IV small-block, General Motors also created its variations for trucks. Despite some shortcomings, this motor is considered to be a new milestone in the history of the brand’s performance engines.

Being the debut motor of Gen IV small-block V8 range, LS2 had a displacement of 6.0 L, or to be more exact 5.967 L. Having a larger capacity than 5.7-liter LS6, LS2 substituted it in some vehicles.

Having much in common, many parts of Gen III and Gen IV are interchangeable. However, always double-check the compatibility before substituting details.

Comparing to Gen III engines, LS2 keeps a bigger bore of 4.00 inches with a stroke of 3.62 inches. Moreover, the compression index was raised to 10.9. To compare, LS6‘s compression rate equaled to 10.5.

LS2 is the only motor of the series, which goes with aluminum block and cylinder head. Like other motors of the LS lineup, this one features pistons made of hypereutectic aluminum alloy, which deals with decreasing the thermal extension of the piston and allowing a denser fit between cylinder and piston.  Moreover, pistons had a flat-top design. LS2 utilizes a regular valve train with push rod overhead-valve, keeping 1 intake and 1 exhaust valves per cylinder.

The release of LS2 meant the start of the production of GM’s Gen IV short-block V8 range. Providing more power, that platform had some other upgrades, including active fuel management. LS2, manufactured between 2005 and 2009, was first employed for Chevrolet Corvette and later, some other high-performance automobiles utilized it.

GM’s engineers decided to utilize cylinder heads with proven efficiency for the brand-new LS2 and borrowed them from LS6 motor, employed for Corvette Z06. While LS1 kept classic heads, LS6 gained enlarged inlet ports plus a combustion chamber with unshrouded valves. The brand assures that such a design of cylinder heads is able to produce more effective whirl of air/fuel blend in combination with flat-topped pistons. Thus, the compression index rises to 10.9 while LS1 keeps the one of 10.1 and LS6’s one equals to 10.5. Consequently, motor’s output increases to 400 hp and, simultaneously, it reaches better fuel economy in comparison with its predecessor.

Similar to LS6, LS2 keeps 2.00 in intake valves and 1.55 in exhaust valves with valve springs built to deal with motor’s 6,500 rpm revolutions range. LS2’s compression index is pretty high and even not all high-performance V8 engines can boast of such rate. Moreover, such index will definitely make turbo and supercharger manufacturers interested in what’s the maximum boost this motor can reach.

For better airflow, LS2 cathedral-port cylinder heads may be CNC ported and milled up to 0.030 inches for higher compression.

The compression of 10.9 may be increased to 11 by application of proper camshaft plus fuel with more octane.

Motors, reaching 7,000 rpm and more, maybe modified with hollow-stem inlet valves from LS3. Being pretty light, they can be cut to 2.000 inches to be compatible with traditional valve seats.

The selection of aftermarket heads for LS2 is pretty vast. They flow more smoothly and feature thicker decks to provide a proper head gasket seal. Various runner and chamber volumes are for sale, even from 15 degrees to 13.5 degrees valve angle for greater output. Thus, more than 480 hp can be reached with an average-sized camshaft and corresponding intake.

Additionally, the motor can be restyled with the help of LS3’s heads, intake plus fuel rails. Valves are closed on a 4.000-inch bore, knocking down airflow and output. That’s why many car enthusiasts prefer to apply aftermarket cathedral port heads plus intake.

Gen IV small-block motors are equipped with a fresh single-bladed throttle body of 90 mm, which operations are controlled by electronic throttle control.

Electronic throttle control is present in all motors of the range, running without classic cable-operated throttle operations. Thus, gas pedal passes the information about the necessary throttle movement amount directly to the computer.

Car enthusiasts, who have very big throttle body on their high-productivity LS1 (or LT1 on that score) are aware of the sensitivity of designs with one blade. However, General Motors assures that electronic control assists the 90 mm throttle body to operate smoothly and foreseeably. Furthermore, it excludes the need for idle air control motor, cruise control module plus throttle relaxer for traction regulation.

Motor’s throttle body is installed on intake manifold on a slight upward angle for minimization of water amount at throttle body’s underside. There is nothing extraordinary in manifold design, just an updated cross-over plenum construction in comparison with LS1 and LS6. Identical to Gen III variations, LS2 is built of lightweight composite material and goes in classic black color.

To the point, if you doubt the effectiveness of such a manifold design, we advise you to have a look at fresh 3-valve 4.6 “cammer” engine of the 2005 Mustang. It keeps a very similar intake manifold and even its front-and-center position resembles the one in LS1, LS2 and LS6.

Along with valve springs and rockers, it’s crucial that camshaft is compatible with compression, torque converter, rear-end gears, etc. Remember that piston-to-valve clearance is dense with cams over 230 degree duration at 0.050 inch. Usually, automobiles drive camshafts in about 220 degrees while trucks do that in 208-215 degrees on the intake.

Another LS2’s blind side is trunnion bearings in original rocker arms. While updating the valvetrain, you may install a trunnion upgrade kit as well. Original rockers are located on a pedestal and are available for 0.600 in lift. Street-driven hydraulic roller camshafts are limited to 175-pound seat and 450 pounds of open spring pressure. Seeking for higher lift, consider restyling to full roller rockers.

4X, 2006 Corvette gear may assist in converting to 3-bolt camshaft if your LS2 was released starting from 2007.

Additionally, LS2 motors, released after 2007, may have troubles with spring-loaded tensioner. The way out is to apply wedge-shaped timing chain damper from motors, produced in 2005-2006.

What cars have LS2 engines?

The majority of supercharger kits are bolt-on and can be easily installed alongside original details and pump gas. You may also buy more professional superchargers, but be ready to make some other updates as well.

Nitrous kits can be applied instead. They are pretty affordable and can be easily mounted. Street kits demand minimum updates in other motor parts. However, if you seek for greater output, more serious upgrades of motor details are required.

No matter what you choose, a 4-corner steam kit is one more option. It diminishes hot spots in the 7th cylinder, which lead to piston rings butting and cracking piston’s ring lands.