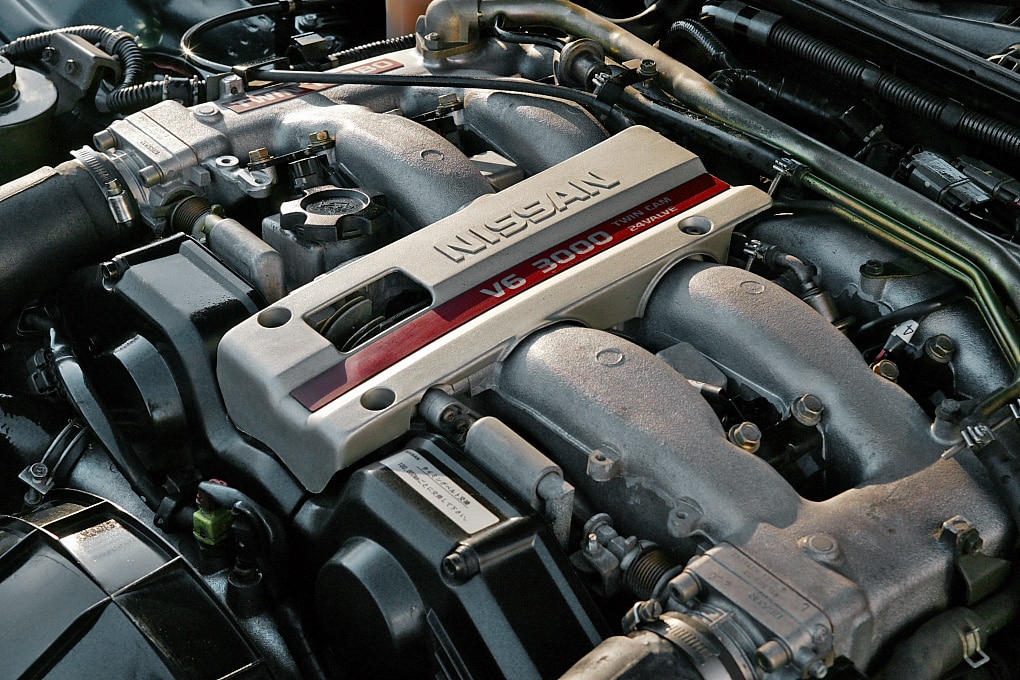 Though 300ZX automobile could be also equipped with VG30DE motor, VG30DETT became the most widespread choice thanks to twin turbochargers.

Its name can tell a lot about this motor as Nissan opts for engine’s name utilizing expository code of letters and numbers. For instance, VG is a name of the motors line.

Manufacture of VG motors was launched in 1983 and lasted till 2004.  They were preceded by motors of L range, released between 1967 and 1983. The debut VG30DETT motor was produced in the United States in 1990. It was manufactured for 6 years, till 1996, though in 1994, Nissan VQ motor, which is still manufactured, substituted it.

Furthermore, while VG signifies the motor series, the other symbols are also important.

Thus, number 30 indicates the engine’s 3.0-liter capacity; D implies that valve mechanism features dual overhead camshafts; E stands for the electronic fuel injection while TT denotes the motor’s twin turbochargers. Besides, there are also VG30DET motors, where one T means that engine is supplied with only one turbocharger.

VG30DETT gained great popularity due to its outstanding output. It was able to reach 300 hp and a torque of 283 lb/ft.

In 1990, Z-automobiles by Nissan brand turned into the best selling sports vehicles available for sale. More than 1 million cars were purchased that year.

Besides, at the 1990 Super Bowl, Nissan even presented an ad, in which 300ZX won the drag race, competing with motorcycle, airplane and LeMans race automobile. However, that commercial was never showed again.

Being built on the framework of non-turbo VG30DE, this motor was subjected to various modifications with the purpose of getting great performance results.

Having less capacity but producing more power, 300ZX was a real success. And it was the main merit of twin turbochargers.

Despite having many more astonishing peculiarities, VG30DETT became the final Nissan motor, comprising 4 valves per cylinder, double overhead camshafts plus a turbocharger. Additionally, RB20DET motor had the identical configuration.

VG30DETT featured an iron block with aluminum heads, which made the motor rather robust to cope with the increased power, produced by twin turbochargers. Moreover, owners of these engines state that they can be very durable if proper maintenance is provided.

As VG30DETT is a 6V motor with double overhead camshafts, de facto, it features four camshafts (a quad-cam). In total, there are 24 valves with 4 valves per cylinder.

VG30DETT is often referred as a bulletproof engine. Usually, troubles arise because of the old thing crashing and corroded connectors. Additionally, first versions of motors had troubles with fuel injectors. But oil leakage or heating problems aren’t common.

In the vehicles, released in 1990-1991, brake master cylinder may start leaking after 40,000-50,000 miles run. The replacement will cost you about $200. The latest parts are upgraded and so, they have a longer lifespan. If a car you are going to buy has any of these malfunctions, tell the distributor that you will pay less and spend the saved sum on the details’ renovation.

Automobiles with turbocharging, released before 1/90, plus naturally aspirated vehicles, manufactured before 7/90, may face troubles with defective valves. Valves can unscrew themselves from the head, leading to the rough idle and compression reduction. In order to prevent this problem, it’s advisable to inspect the motor number. Turbo vehicles with motor numbers below 619550 and naturally aspirated vehicles with numbers below 777599 often face this malfunction. Additionally, take a look at the data tags attached to the doorpost at the driver’s side and under the hood. They contain information about date of manufacture along with serial numbers.

To Sum It Up

Remaining rather a widespread motor, VG30DETT is a strong and enduring engine, able to achieve 300 hp with almost no troubles.

Having less capacity and greater output than its rival, 5.0-liter 1990 Ford Mustang, 300ZX automobile became one of the most popular sports cars of that time. However, the motor was in stock only at the American market and was sold only till 1996. So, there is a pretty limited amount of these engines, which still function. Usually, they are kept by collectors or drivers, obsessed with high performance cars. So, it can be pretty hard to acquire VG30DETT.

SR20DET Engine History, Specs and Info You Need to Know