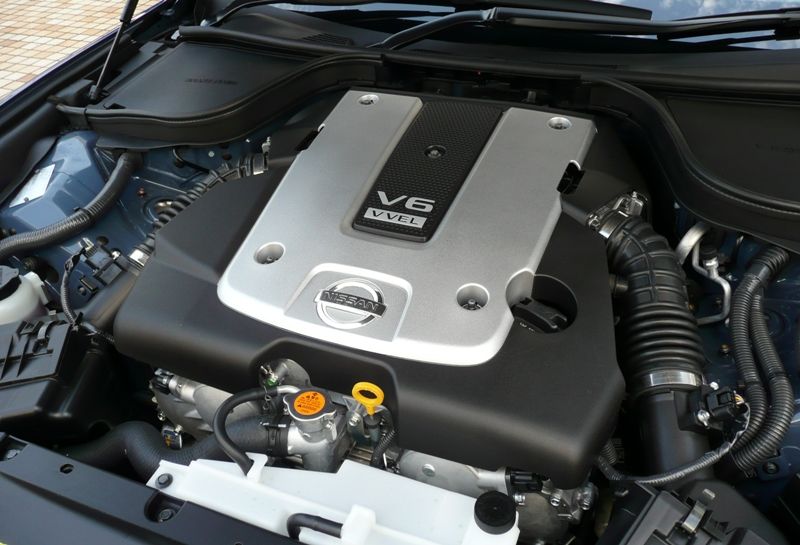 Nissan VQ engines, successors of VE and VG motors, were first released in 1994, but they still remain among the most reliable and powerful motors, constantly getting to Ward’s 10 Best Engines list. They are V6 motors with the capacity ranging from 2.0 to 4.0L and featuring aluminum block and heads. Being constantly updated, engines keep modernized variable timing system and direct fuel injection. But let’s take a closer look at VQ37VHR, a motor employed for celebrated Nissan 370Z car.

The manufacture of VQ37VHR was launched in 2007. It was built on a framework of VQ35HR. Being the most modernized engine of the series, this 3.7L motor is utilized for a number of Infiniti models and Nissan sports cars.

Having identical cylinder bore, VQ37VHR gained a taller cylinder block than its predecessor plus a larger stroke. Moreover, upgraded light pistons and connecting rods were applied. Consequently, that helped engineers to increase capacity from 3.5 to 3.7L.

In comparison with VQ35HR, torque was increased by 2 Nm (1.5 ft-lb), but the maximum rpm changed from 4,800 to 5,200. Besides, the torque curve was subjected to some optimization.

What cars have VQ37VHR engine?

Though VQ37VHR is notable for its reliability and endurance, it may have some malfunctions from time to time. Among them are:

Nissan assures that a new VQ37VHR engine is able to reach 333 hp. However, numerous tests showed the horsepower of 280 to the rear wheels. Consequently, Nissan motor loses 15% of its output. And when you have some updates in mind for this engine, take into account this number. Thus, if you wish to have 340 hp, it’s necessary to supply around 400 hp. Optimization of cold air intakes and performance chips is able to raise engine’s power to 360 hp. Clearly, it’s the maximum for naturally aspirated engines. That’s the main reason why many people opt for forced induction.

Additionally, a turbocharger is able to increase the VQ37VHR power to 500 hp, though it’s rather expensive. The Stillen supercharger kit for this motor is a Vortech V3 supercharger featuring added internals. As a result, you can reach 7 psi boost pressure and 11.5 compression index, which may help you to gain around 550 hp. By acquiring the Greddy twin-turbocharger kit (2X TD06-20G), you will get approximately a similar output. Take into consideration that the brand’s low compression pistons and improved rods can be added as well. However, they are rather costly.

Many owners of Nissan 300Z and Infinity automobiles tune up their motors. Depending on what modifications you made, VQ37VHR has a potential of reaching about 1000 hp. Entirely built bottom and a sleeved block accompany great power rates. However, the horsepower of 1000 reduces engine’s longevity as many details may break.

If money is not the issue for you, you have a chance to turn this motor into the one for races by acquiring a fresh crank, rod plus racing pistons. Very often, it’s necessary to machine the block and mount new internals. To the purpose, as VQ37VHR has been produced for a while, the selection of possible tools for updates is pretty wide.

As it’s been said before – It’s rare but there is a gasket that seals your internal engine block off from the timing chain area up at the front. So you should pay attention on this. BUT, I do know that they fixed this issue for 2012+ production years.
https://youtu.be/MURP6Xiwm7Y