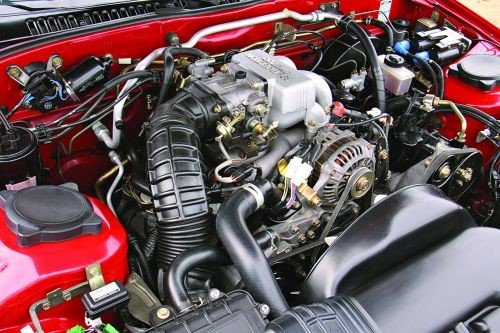 Mazda 13B, also named Mazda Wankel Engine, is a 1.3 L (1308 cc) motor, manufactured for more than 30 years and employed for many brand’s vehicles, including celebrated sports car RX-7. Having much in common with 12A engine and looking like its elongated modification, this one also keeps a two-rotor construction without any changes in rotors’ radius, which remained the same since the manufacture of 10A. Rotors are 80 mm (3.1 inches) thick.

Primary versions of 13B featured carbureted fuel system and single ignition system distributor. Such motors were produced in 1974-1980 and were utilized for vehicles with AP mark. Later, 13B went with injection. In 1984, 13B-RESI motor (Rotary Engine Super Injection) kept Bosch L-Jetronic fuel injection system along with intake manifold with 2-level intake box, acting as turbocharger from the Helmholtz resonance. As a result, these naturally aspirated engines gained better power and torque. They reached 135 hp (101 kW) and a torque of 180 Nm (130 ft-lb).

Being first released in 1991 and employed for RX-7 Gen 3, 13B-REW was an absolutely restyled variation of 13B. It was the first mass-produced rotary engine, featuring twin sequential turbochargers. 13B-REW gained 2 large Hitachi HT-12 turbochargers. Two main functions of the second turbocharger were to share exhaust flow and augment acceleration of the first turbo after 4,500 rpm.

13B-RE, applied for Mazda JC Cosmo vehicles, featured Hitachi HT-15 turbocharger with 57 mm diameter along with Hitachi HT-10 of 51 mm size. The smaller one gave the boost from 1,500 to 4,500 rpm. Simultaneously, the bigger one provided the boost up to 8,000 rpm. Such a combination of turbochargers prevented any delays in their work.

13B Engine Problems and Reliability

Rotary engines consume much fuel and need regular maintenance. That’s why, they are not popular for daily use. Though they are applied for racing cars as power is more crucial there than lifespan.  Simultaneously, if enough service is provided and high-quality fuel and oil are used, this engine can be rather durable and secure.

13B consumes much oil as it’s injected into the combustion chamber lubricating it plus increasing lifespan of apex seals. It’s crucial to control the oil level and oil pressure. Besides, you can improve motor durability by adding oil to the gas, lubricating the fuel. Thus, it permits to completely remove oil metering system.  Moreover, you are free to do the same with RX-7 (1989-1991) with electronic oil metering system, giving 25% less amount of oil in comparison with models, produced between 1986 and 1988.

Moreover, it’s not advisable to allow the engine to overheat. Thermostat may stop functioning if any cooling leakage happens. Once a year or a year and a half, it’s recommended to replace coolant and thermostat. Mazda OEM thermostat is the most preferable. Besides, you need to examine hoses and belts.